In mathematics, a dynamical system is chaotic if it is (highly) sensitive to initial conditions (the so-called “butterfly effect), which requires the mathematical properties of topological mixing and dense periodic orbits

Alongside fractals, chaos theory is an essentially universal influence on patterns in nature. The relationship between chaos and fractals is that strange attractors in chaotic systems have a fractal dimension. Some cellular automata, simple sets of mathematical rules that generate patterns, have chaotic behavior, notably Stephen Wolfram’s Rule 30.

Vortex streets are patterns of vortices that are whirling, thus creating an unsteady separation of flow of a fluid, most often air or water, over obstructing objects Smooth (laminar) flow starts to get disturbed when the size of the obstruction or the velocity of the flow become large enough compared to the viscosity of the fluid.

Meanders are bends in a sinuous form that appears as rivers or other channels, which form as a fluid, most often water, flows around bends. As soon as a slight curve appears on the path, the size and curvature of each loop increases as helical flow drags material like sand and gravel across the river to the inside of the bend. Erosion accelerates, because the outside of the loop is left clean and unprotected, further increasing the meandering in a powerful positive feedback loop.

The study of how complicated patterns can result from simple behaviors of individuals within a system is called complexity theory. On the other hand, Chaos is the opposite, it’s the study of how simple patterns can be generated from complicated underlying behavior. It’s really about finding the underlying patterns in apparently random data. It is unfortunate that the word chosen to describe this form of order is “chaos”, because the word suggests complete disorder. Nonetheless, “chaos” is defined scientifically as a form of order that lacks predictability.

The theory helps us to understand patterns in nature. The currents of the ocean, cloud patterns, the branches of trees, effects of turbulence, chaotic patterns show up everywhere around the world.

Chaos theory states that, ordered, regular patterns can be seen to arise out of seemingly random, erratic and turbulent processes, under certain conditions. Chaos theory does not highlight the inherent disorder and unpredictability of a system. Instead, it emphasizes the order inherent in the system and the universal behavior of similar systems. 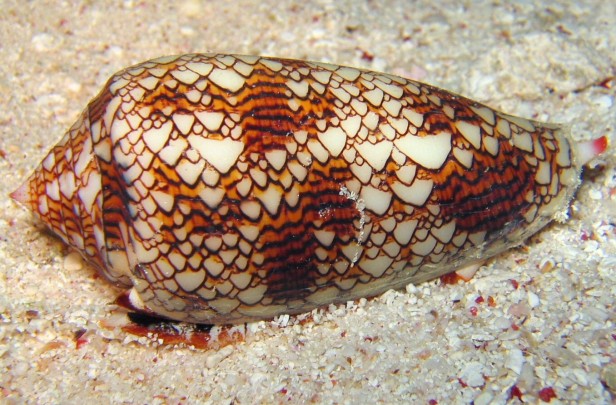 Computer graphics allow to visualize and study how these patterns appear and disappear with changes in the system parameters. Many patterns, can now be subjected to computer modeling, for example the vortex of a tornado, stock market trends, and crowds of people. 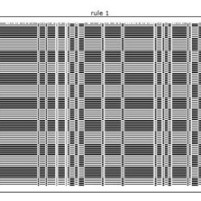 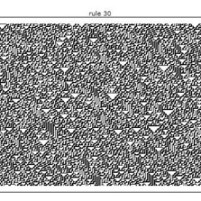 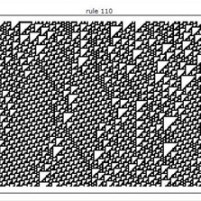 Chaotic patterns use a fixed and definable set of rules for pattern formation.The two characteristics of chaos are:

In fluid dynamics, a repeating pattern of swirling vortices is called Kármán Vortex Street, and is caused by a process known as vortex shedding. This process is responsible for the unsteady separation of flow of a fluid around blunt bodies. It is responsible for such phenomena as the “singing” of suspended telephone or power lines and the vibration of a car antenna at certain speeds, and is named after the engineer and fluid dynamicist Theodore von Kármán.

Vortex shedding is a flow that takes place when a fluid such as air or water flows past a bluff body at certain velocities, and is dependent on the size and shape of the body. In this particular flow, vortices are created at the back of the body and detach periodically from either side of the body. The object will tend to move toward the low-pressure zone, and the fluid flowing past it creates alternating low-pressure vortices on the downstream side of the object. 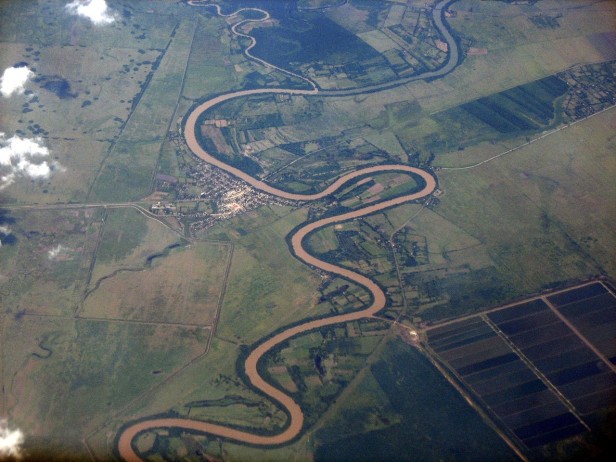 A meander pattern includes a series of regular sinuous curves, bends, loops, turns, or windings in the channel of a river, stream, or other watercourse. When a river shifts its channel within a valley or it swings from side to side as it flows across its floodplain it produces as meander pattern. In more detail it is produced by a stream or river as it erodes the accumulation comprising an outer, concave back (cut bank) and deposits this and other accumulations downstream on a convex bank(inner side) which is typically a point bar. The result of these accumulations or sediments being eroded from the outside concave and their deposition on the inside convex bank is the formation of a sinuous course as a channel migrates across the down-valley axis of a floodplain.

The area within which a meandering stream shifts its channel across either the valley floor or its floodplain from time to time is known as a meander belt. This belt typically ranges from 15 to 18 times the actual width of the channel.

Meanders move downstream over time, sometimes in such a short period of time that it could create civil engineering problems in the attempts of local municipalities put into maintaining stable roads and bridges. 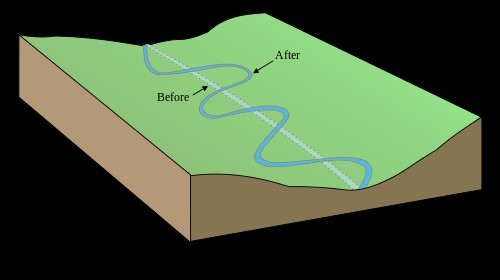